CHUBBUCK – While a week of spring snow created some trouble, Chubbuck’s new Town Hall remains on schedule for opening in mid-July.

“The only part that worries us about the schedule, but we don’t worry too much about it, is the site work and the landscaping,” Rodney Burch, public works director for Pocatello, told EastIdahoNew.com. “We’re grateful that I’ll call it early spring. We didn’t like the snow storm that we had every day for a week. “

CONNECTION | Shops, food trucks, a walk-through city center and a new town hall. How Chubbuck will change this summer.

Despite the snow, CM Company, Inc., the construction management company responsible for the development, saw little slowdown, according to regional manager Garrett Goldade.

Goldade and his crew are currently laying the infrastructure and “flooding” the ceiling grid while the interior is finished.

Trenches are being dug to supply the site with water, gas and electricity. And lights, smoke detectors, and HVAC ducts and vents are installed. It’s an exciting yardstick for Burch, who stated that there are new things to consider with each weekly visit.

With progress, Burch was able to give EastIdahoNews.com a more detailed tour of the inside of the building, including the views from the mayor’s office.

A view of Kinport Peak as seen from the Mayor’s office on the Chubbuck City Hall development site. | Kalama Hines, EastIdahoNews.com

In the video above, wood paneling can be seen near the main entrance. This cladding is applied as an accent throughout the entire interior of the town hall. The polished cable design of the handrail on the stairs near the paneling spans the entire stairwell on either side, as well as the walkway overlooking the entrance.

While interior completion has begun, work has begun outside including the grading and paving of Chubbuck’s two new streets – Kinport Crossing and Scout Mountain Way.

“It will all start in the next week or two,” Burch said of the road development. “It probably won’t end until mid-June.” 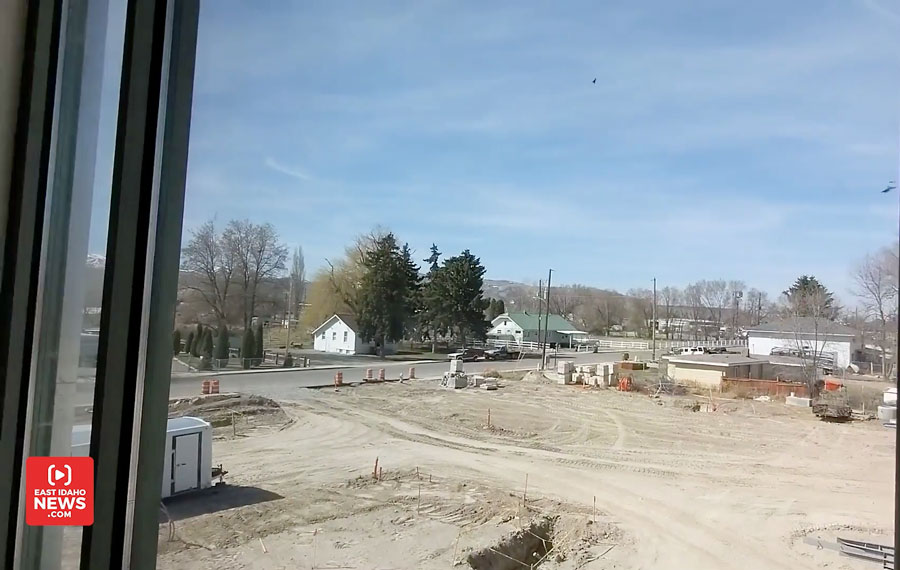 A view from the offices on the second floor of Chubbuck City Hall. The development of the new roads – Kinport Crossing and Scout Mountain Way – is marked by the traffic barrels (the group of four in the center left in this picture). | Kalama Hines, EastIdahoNews.com

With landscaping the only obstacle so far, Burch said the city is ready to move into the new town hall and begin operations at the new location while the landscaping is complete. But that’s “not a preference,” he said.

Part of the area around the town hall is divided into pads for businesses as part of the city center map. The development and assignment of these pads is a process carried out by the Chubbuck Development Authority and is expected to begin with completion by the end of 2022 in the near future. The pads are designed according to the specifications set by the city that meet the requirements of surrounding development. And companies are given the opportunity to bid on a lease.

City officials remain optimistic that even without landscaping, the building will be completed in time for Independence Day.