Planned landscaping around the south portal of the Chiltern tunnel

The Colne Valley Western Slopes Project has been approved by the Three Rivers District Council and Buckinghamshire Council under Schedule 17 of the HS2 Act.

Around the south portal of the tunnel near Maple Cross, just behind the M25 motorway, 127 acres of new chalk grassland, forest, woodland pastures and wetlands will be created.

Align JV has started the first drive of the 15.75 km long, two-bore Chilterns Tunnel. The second tunnel boring machine (TBM) is due to start driving next week.

A 20 meter long corkscrew is attached to the front of each TBM, which pulls the excavated material backwards out of the machine. With a watery mass that is pumped from the back of the TBM to the cutting head, the returned overburden is conveyed in the form of liquid manure through pipelines along the length of the TBM. This slurry is then processed to separate sand, silt and chalk. Sand and silt are removed by centrifuge. The remaining chalk is then compressed to extract water and the cakes are stored in an on-site storage mass for further drying. It is these dried chalk cakes that form the raw material for landscaping to create a lime-rich lime.

A total of around three million cubic meters of chalk will be excavated from the tunnels and, in addition to crushed concrete and limestone aggregate, will be used again in landscaping during construction

As part of the project, 90 hectares of chalk grassland will be sown in reprofiled soil layers, whereby the nutrient-poor subsoil of the site will be mixed with chalk from tunneling and recycled concrete as well as aggregates from construction work. The design of these soil profiles will be completed through a collaboration with Cranfield University and Tim O’Hare Associates on a research study that utilizes the results of both laboratory and field testing of the soil layers.

As HS2 cuts a swath through southern England, the emphasis on repairing the damage is an important part of the political narrative. 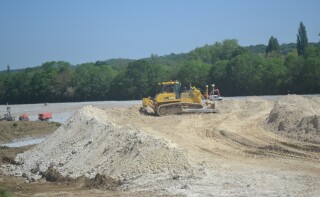 How much of the page does it look now?

Peter Miller, Environmental Director of HS2, said: “The Western Valley Slopes project is one of the key components of our Green Corride program to create better connected, sustainable and biodiverse landscapes along the route of the new railway line and will make a significant contribution to CO2 emissions. Achieve the reduction target of HS2. It demonstrates HS2’s approach to addressing many of the complex issues surrounding climate change that are central to protecting our environment, and is a great example of how good design and planning can mitigate the effects of climate change. “

Cllr Phil Williams, Senior Environmental Officer, Three Rivers District Council, said: “The draft evolved from the original proposals thanks to the work of council officials and collaboration with the Colne Valley Regional Park Panel, which includes a number of local groups. “Who work together to achieve a more distinctive and sensitive result in the Colne Valley.”

The plans were developed by HS2’s main contractor for this section, Align – a joint venture between Bouygues Travaux Publics, Sir Robert McAlpine and Volker Fitzpatrick – in collaboration with Jacobs and LDA Design.

Field trials are in preparation for the final sowing and planting of trees and bushes in 2025.

Do you have a story Email to news@theconstructionindex.co.uk

34 mins ago
Artificial Grass And Turf