The La Jolla Traffic & Transportation Board voted for a concept to beautify and improve safety along part of Nautilus Street.

La Jolla resident and architect Trace Wilson brought the idea to the board as a discussion point at last month’s meeting, presenting ideas for improving the condition of Nautilus between Fay Avenue and Muirlands Drive. Wilson is a member of Vision La Jolla, an ad hoc committee of the La Jolla Community Planning Association.

At the T&T meeting on July 21, Wilson proposed a roundabout at Nautilus and Fay, with two “potential” roundabouts at Avenida Mañana and Muirlands Drive.

The concept also includes landscaping along the sides of Nautilus, adding a landscaped median, and moving to diagonal parking closer to La Jolla High School and Muirlands Middle School.

The design elements, according to Wilson, would not only beautify the area, but also help to calm and slow down traffic, “and make better use of the roadway”. 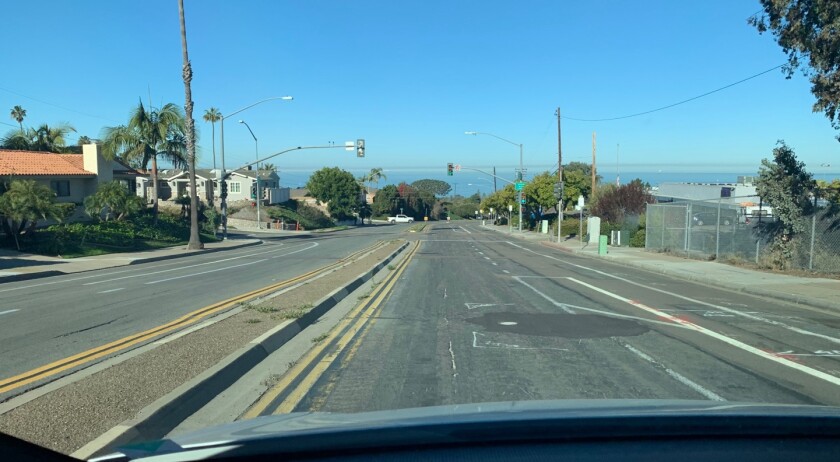 “We can do better,” says Trace Wilson, La Jolla architect, of the existing conditions along Nautilus Street.

Showing a photo Wilson took of the current conditions on Nautilus, he said, “We can do better. This is a massive right of way of asphalt. It is completely unused. Eliminate the visual clutter, look at the horizon line, enjoy better public improvements. “

Resident Sally Miller said she agreed that Nautilus “needs beautification,” but added that she avoided the Bird Rock neighborhood of La Jolla because of its traffic circles, which she believes are dangerous. “That would be a safety disaster,” she said.

Paul Jamason, a board member of BikeSD, said the roundabouts at Bird Rock have reduced the number of collisions and are “safer for cyclists”.

La Jollan Glen Rasmussen also spoke out in favor of the planned roundabouts and said: “They keep the traffic going and slow down the traffic. What you lose and stop at the red lights, you gain in constant motion. “

Wilson says that roundabouts “are much safer, better for the climate, and create a physical barrier that slows you down. That is the important and decisive component. “

He encouraged those attending the meeting to focus on the whole concept. “We start with the plan, which gives us the scope that then allows us to go to various institutions and government agencies to see how we can build it,” he said.

Brian Earley, chairman of T&T, said the board was “just looking to validate the concept. We don’t have a budget here; there are obviously a number of other details. “

Vice Chairman Dave Abrams decided to approve the plan and forward it to both the City of San Diego and the La Jolla Community Planning Association. The motion was passed unanimously.

Board Members: T&T unanimously approved the list of board members nominated last month. Earley was elected chairman, Abrams vice chairman, and Donna Aprea remains as secretary. The term of office is one year.

In May, T&T approved the subcommittee’s motions to the city, including a full survey of speed zones along La Jolla Boulevard; Enforcement of laws relating to the movement of vehicles, including scooters and bicycles; Installation of lanes for bicycles and scooters; an increase in signs promoting pedestrian safety; Crossing of crosswalks; and installation of roundabouts at various intersections.

Subcommittee leader Ira Parker shared a letter from Pence indicating that the city will evaluate several ideas presented by the committee and that some could be evaluated faster than others. The letter was not elaborated.

The LJSA voted to file the motion on July 14 following an accident on June 13 that injured two children and their mother when they were hit by a vehicle as they crossed the street at that intersection.

“We ask all of you to support this and forward it to the CPA [Community Planning Association] and send it to Gary Pence and get it moving, ”said Janie Emerson, President of LJSA, at the T&T meeting.

She said the accident “could have been catastrophic. We want to move with it immediately. “

Earley, who is also a board member of the Shores Association, said, “La Jolla Shores Drive is probably one of the busiest corridors in northern San Diego. This could be a pretty quick fix and it could be very helpful for The Shores, which visit over 2 million people annually. “

A motion in support of the LJSA motion was unanimously adopted.

The forum, titled “Separating Myths from Facts,” was planned by La Jolla City Councils, LJVMA, Enhance La Jolla and LJCPA to discuss “how parking could be better in La Jolla,” Decker said.

The forum should report on how many parking spaces and which types (free, time-controlled or chargeable) are available, the effects of parking on traffic jams, the results of the LJVMA visitor survey 2021 and “the four M of parking solutions”, according to Deckerer Motivation, Dealers, Marketing and Monetization.

He asked T&T to sign up as a co-sponsor because “As a key group and one that is clearly influential on this matter, I think it would be great to have you included in our discussion.”

Parker urged sponsors to consider “a broad impact view” [of parking issues] to the citizens of all of La Jolla, ”noting that neighborhoods like the Barber Tract would benefit from being included in the discussion.

Decker said the parking lot discussion was “technically all of La Jolla. I think much of the focus will be on The Village, but there is nothing that technically should be left out other than something we can talk about and at least help start the discussion. ”◆