Antonio Butts, Executive Director of Walnut Way, spoke about the growth of Blue Skies Landscaping over the past 12 years.

Founded in 2012, Blue Skies Landscaping provides landscaping, environmental and green infrastructure services in the greater Milwaukee area. Over the years the organization has developed several pocket parks on urban lots, installed green infrastructure across the region, and removed sidewalks and impervious surfaces to accommodate green spaces.

It also provides vocational training and employment for those traditionally faced with barriers to employment seeking to build skills in the growing trade. It currently employs 16 people.

The organization has grown about 20% annually over the past 8 years, which has increased the need for more equipment stores, training facilities, offices and a demonstration site for green infrastructure and clean energy. 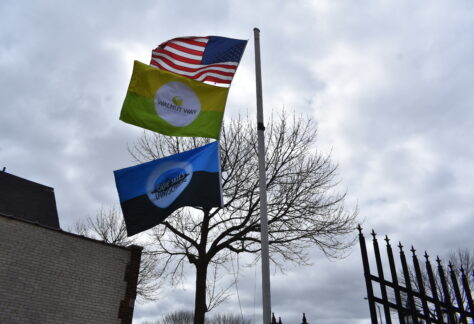 Flags were hoisted to celebrate the new headquarters of Blue Skies Landscaping.

“This is a big deal for us as it allows us to scale, grow our operations, expand our training opportunities and find better jobs for the neighborhood,” said Antonio Butts, executive director of Walnut Way.

The program moved to its new headquarters on April 1st. Blue Skies previously stored its equipment in various garages in the neighborhood. 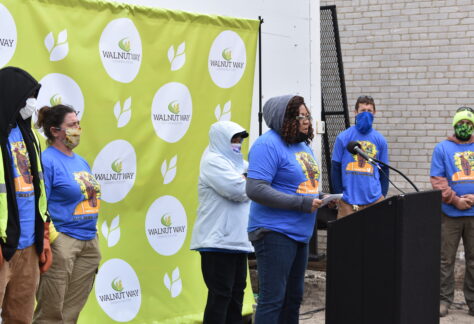 Walnut Way plans to raise $ 500,000 for the headquarters project.

Walnut Way was founded in 2000 by the residents of Lindsay Heights as a neighborhood nonprofit with the aim of regaining and re-developing the community’s economic health and vitality.

At the end of last year the organization completed the second phase from the $ 3.3 million Innovations and Wellness Commons, a 17,200-square-foot commercial mixed-use development on North 16th Street and West North Avenue that houses a variety of health and wellness services and retail tenants. The development includes solar panel and battery storage, as well as a range of energy efficient and rainwater management functions installed by Blue Skies.

Thompson to speak on landscaping with native plants